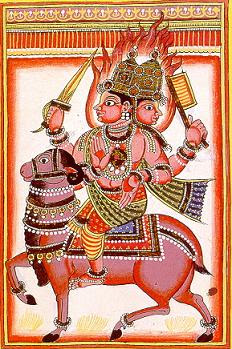 Agni is the Hindu god of fire and the acceptor of sacrifices. He is present in many traditional Hindu ceremonies such as the honouring of a birth (diva lamp), birthdays (birthday candles), prayers (diva lamp), weddings (Yagna) and death (cremation).

The Hindu wedding ceremony is in essence a fire-sacrifice and no Hindu marriage is considered complete unless in the presence of the Sacred Fire. This has a deep origin in the ancient ceremony of cementing the bonds of friendship and alliance. A Hindu wedding  incorporates many of the timeless rituals and customs from the Vedic period. 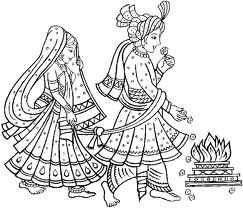 The Saptapadi सप्तपदी is the most important component of Hindu weddings.  Sapta means seven and padi means steps in Sanskrit and the Saptapadi is a ceremony where seven encirclements of the Holy Fire by the bride and the groom together. This symbol of Agni is witness to the vows they make each other. Walking around the fire together, the most important part of the ceremony, they say a vow with each step to each other for this life long union.

The vows are about sharing, strength, wealth, health, happiness, children, comfort and friendship. During the pheras or steps, the Gods are invoked to shower blessings on the bride and the groom. It is believed that when a married couple takes seven pheras together, their married life will be happy for a long time. You can read and download the vows here.

In every region of India their are small differences such as which partner walks first and which hand is held but always there are circles around the Holy Fire.
With each circuit, the couple makes a specific vow:

After the completion of the seven steps ceremony, the couple sit down with the wife now on the left side of her husband. Now the couple are husband and wife. The husband garlands the wife and the wife garlands her husband.


RESOURCES:
Mythology, An Illustrated Encyclopedia of the Principal Myths and Religions of the World by Richard Cavendish.
A South Indian Wedding – The Rituals and the Rationale by Padma Vaidyanath
at 1:14 AM