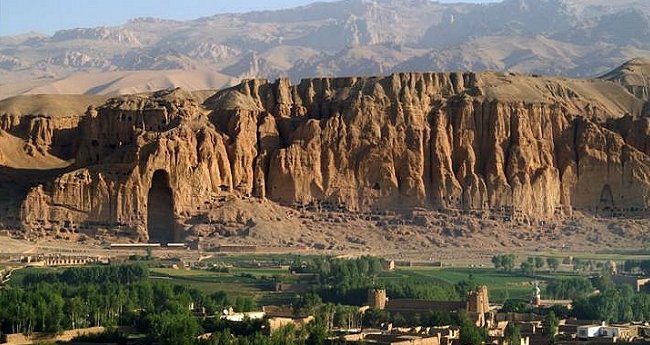 Bamiyan Valley is located in Bamyan Province, Central Afghanistan.
It was part of the Silk Road and holds remains of many forts dating from various Islamic periods. "The Silk Road is a caravan route linking the markets of China with those of Western Asia. Until the 11th century, Bamiyan was part of the kingdom of Gandhara. It was the site of several Buddhist monasteries, and a thriving center for religion, philosophy, and Indian art. It was a Buddhist religious site from the 2nd century up to the time of the Islamic invasion in the 9th century. Monks at the monasteries lived as hermits in small caves carved into the side of the Bamiyan cliffs." WIKIPEDIA
﻿

Bamiyan is renown for its huge statues of Buddha.  They were built by the Kushans, with the guidance of local Buddhist monks. Unfortunately many statues were destroyed by the Taliban in 2001 but the good news is that it is now a World heritage listed site.
In addition to the ancient Buddhist remains, you should visit Bande Amir, a place with six picturesque lakes and a gorgeous landscape.
﻿

WOW, your pictures are incredible... thank you for posting. I would love to see Bamyan Valley, it looks amazing:)

Thank you, thank you...I wish I could post the photos even larger but this style of blogger does not allow me to enlarge it's width. You have some great travel photos on your blog too - venice i think?

That's so interesting. All we ever hear about Afghanistan has to do with war. Thanks for linking up with I saw it on Vacation.