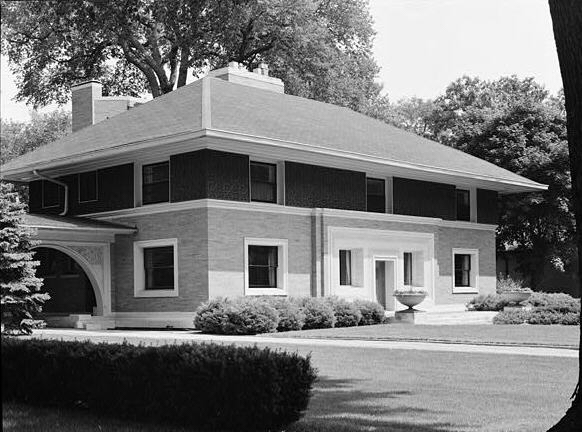 The Winslow House, designed by architect Frank Lloyd Wright, was Wright's first attempt at reinventing the traditional suburban house.
Built 1894, the Winslow House was different to other homes in the area. It had a broad-eaved hip roof and a low chimney. The brick walls came straight up from a cast stone coping. The second story was covered in terra cotta stone.  At the rear of the house the studio was designed around a tree. Apparently the design was so unusual for the time that Mr Winslow stopped catching his normal train to avoid his neighbors' remarks.
Many of Wright's characteristic design elements are seen in this home including enhancing the horizontal which he achieves by dividing the facade into distinct horizontal bands and using wide bricks in the lower floor.  The house A projecting is "anchored" to the landscape by a limestone base. These features are seen in Wright's later Prairie Style homes. The building was added to the National Register of Historic Places in 1970 (building #70000242).